The first cell-phone I purchased was in 1986. The receiver looked a lot like a home phone, but cradled into a large 5lb battery pack; it cost $3,000 and $1 per minute.  The technology has evolved and advanced  quite a bit since then.  Yet service remains inflexible and unaccommodating, and I can't help but wonder how we've all been lulled into a state of hypnotic willingness to accept it.

The past have months I have been in India, and it was there that I bought my first Smart phone: great technology! And all-in-all, the service was good.  I could walk into any cell-phone store and buy talk and data minutes as needed. And, I could use my phone as a Hot-Spot to connect my computer to Internet.  being on the Internet daily, I  would buy 3G-data minutes in packs of 10GB; talk-time I would buy in much smaller increments. There were no imposed limits to whatever combination of talk, text, and data minutes I could purchase.

When I arrived back in New York City for a one-month on business, my first order of business was to get a local SIM for my phone.

I stopped in at the T-Mobile store on 6th ave at 16th street.  I explained that I had a Mi-Fi Hot-Spot account in NYC with Clear Communications that gave me unlimited 4G internet for $50 a month (I bought it a year earlier when I was still living here), but wanted to compare what T-mobile offered to see if I could avoid using two services by combining voice/text/data and hot-Spot tethering.  For "unlimited talk, text & high-speed internet we have a plan for $70 a month."  Seemed like a no-brainer.

I swiped my card, activated the account, installed the SIM  ... and the Hot Spot didn't work.  The girl who recommended the plan was miffed.  Being pressed for time, I requested she simply cancel the plan, switch me to a simple voice plan and I'd go have my Clear Hot Spot activated.

She THEN informed that the plan was "Non-Refundable."

After a few minutes of back and forth it was clear [to me] that she was clueless to the irrationality of the situation. Is it being unreasonable of me to expect that since the product I purchased minutes before didn't  work that I should be refunded? Apparently, according to T-Mobile, the answer is YES!

I headed out into the cold to attend to take care of other errands, still fuming that I wasted $70.

Uptown I stopped into the T-Mobile store on the corner of 54th and 3rd avenue. The girl there seemed eager to help, and more importantly, actually capable to do so.  She knew right away that my Sony-Erickson Xperia Arch wasn't compatible [to tether as a Hot Spot with my computer] on their network, at least at speeds beyond 2G.

She shook her head, "She should have known that this phone was incompatible with our network."

So now what? The plan was nonrefundable, but noted that I could use the money already paid and simply apply it to a different plan. Progress! So I said I wanted to just buy X minutes, text and data. Turns out T-Mobile, or anyone that I am currently aware of for that matter, doesn't provide that.  They have a variety of plans, all grouped packages of minutes, text and data combinations.

None of those accommodated my needs.

Here is an industry that enjoys the luxury of charging the third highest rates in the world, without having to provide us the flexibility we require. Instead they herd us into their prepacked products, forcing square pegs into round holes.

What other industry would we tolerate this from? Any? So why do we allow it from cellphone companies?

I choose the best option available to me and had the plan switched to a 1500 minutes talk/text plan, with not enough data to mention. The balance [from my first $70 payment] would be on account to use towards this new plan in the future I was assured.

I had my Clear Hot Spot activated at Best Buy and was back in business. I thought.

When the T-Mobile minutes were used up you'd think that the money I had on account would cover the rollover. Nope. The phone simply stopped working.  I went back to the store. After a lot of confusion they eventually had it reactivated.

Fast forward eighteen days. My minutes again ran out. There was no plan between the one I had and the $70 a month for unlimited everything, including the data plan I couldn't use.  I was stuck. I was racing to make a meeting and stopped in at 54th and 3rd again; swiped my card, received an instant receipt via text, and was told "all set."

However, en route to one meeting -- while attempting to call and confirm the meeting place for the one to follow -- my calls wouldn't go through.  The second appointment was blown.

I returned to the store and waited, annoyed but patient, for all the customers before me to be served. When it was my turn I stepped up and explained that I paid to recharge the phone thirty minutes earlier, received a confirmation text, but every time I attempted a call I heard an auto-message telling me that the call was not authorized on the network.

"What's problem are you having?" I was asked. "The message that the call was not authorized on the network!" I repeated, feeling like I had again been returned to the land of the stupid -- in a far off galaxy known as T-Mobile. 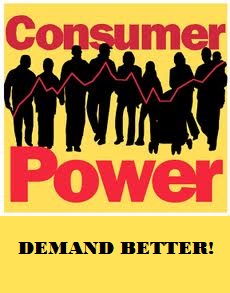 She took the phone, and had begun  typing on her computer. Minutes later, after some testing, she handed it back to me and said "OK, it's working now."

"And what was the problem?" I inquired  "Oh, it was a problem on our end; it's fixed now," -- as though somehow because they fixed their error, that they had done me some great favor --, completely ignorant to the wasted time and effort I incurred from the incident.

Am I alone, or should we as consumers demand better?


Posted by mymoviewpicks at 4:40 PM